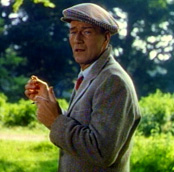 The IFI presents a season of John Ford’s Irish Films

The IFI is delighted to present its season of John Ford’s Irish Films, a focus on the Irish films of a giant of Hollywood and one of the most important filmmakers of the Irish diaspora.

Ford made over 140 films and won an unequalled four Best Director Academy Awards.  Alongside his vast contribution to the Western genre, he also repeatedly returned to stories set in his ancestral home and his Irish films made an important impact on perceptions of ‘Irishness’ both in America and in Ireland. The IFI’s season showcases the four films set mainly or wholly in Ireland but shot in Hollywood, and the three for which he used Irish locations.

Ross Keane, Director of IFI said “Inspired by the tremendous response to the IFI’s Revisiting The Quiet Man programme (co-curated by the IFI and Gabriel Byrne and presented at New York’s Museum of Modern Art), we identified that we wanted to present a part of this programme back at our home in Temple Bar, and decided upon a focus on John Ford’s Irish films to coincide with the 60th anniversary of The Quiet Man. This also allowed us to embark upon a John Ford Film Repatriation Project to acquire pristine copies of Ford’s Irish-themed films for preservation and presentation in the IFI Irish Film Archive. This season shows the first fruits of this project, which is supported by Culture Ireland and the American Ireland Fund.”

The Informer (1935) and The Quiet Man (1952) (both June 10th), two highlights of the IFI’s season of John Ford’s Irish Films, are presented in partnership with IFTA as part of John Ford Ireland: Film Symposium. The Informer created an all-studio Dublin at RKO studios through expressionistic visuals, symbolic touches and a downbeat story centred on a Republican informer who inexorably falls to pieces. The Quiet Man, largely filmed in Cong, Co. Mayo, immortalised John Wayne and Maureen O’Hara’s electric on-screen chemistry in their performances as returning emigrant Sean Thornton who falls for local beauty Mary Kate Danaher.

Hangman’s House (June 17th) from 1928 is one of the great late silent films. An Irish story of oppression and revenge, of romance thwarted and finally fulfilled; it features a young and handsome Victor McLaglen and, if you look closely, John Wayne in one of his early cameos. Also from the silent era, The Shamrock Handicap (June 17th) from 1924 shows Ford already exploring Irish romantic themes. Both of these films will have live musical accompaniment from pianist Morgan Cooke.

Ford’s two Celtic Twilight adaptations The Plough and the Stars (June 23rd) and The Rising of the Moon (June 30th) were made over twenty years apart. Ford collaborated with playwright Sean O’Casey on The Plough and the Stars in 1936. Despite a turbulent relationship behind the scenes between O’Casey and Ford, the film sports vivid performances from the Abbey cast and some fine action sequences. The Rising of the Moon (1957), actually a trio of short stories, was made as a follow-up shoot to The Quiet Man as part of Ford and his producer Michael Killanin’s attempt to start an indigenous Irish film industry in advance of Ardmore.

Young Cassidy (June 23rd), made in 1965, tells the story of the early life of Ford’s former collaborator Sean O’Casey, and brings Yeats and Lady Gregory vividly to life through performances by Michael Redgrave and Edith Evans. Though credited as a John Ford Production, much of the direction was done by Jack Cardiff as Ford was in increasingly declining health and drinking heavily.

The Informer and The Quiet Man are presented in partnership with IFTA on the occasion of the John Ford Ireland: Film Symposium

For further information, interview requests and images please contact Patrick Stewart at the IFI Press Office on 01 679 5744 or pstewart@irishfilm.ie.