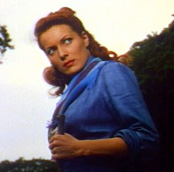 The IFI and IFTA are delighted to present a special 60th anniversary screening of John Ford’s The Quiet Man at the IFI at 18.45 on June 10th as a highlight of the John Ford Ireland Film Symposium and of the IFI’s John Ford’s Irish Films Season. The screening will be attended by special guests including the Dan Ford (grandson of John Ford) and Redmond Morris.

One of the most important and most debated depictions of Ireland on screen, The Quiet Man represents the high water mark of John Ford’s films about his ancestral home. Based on a short story by Maurice Walsh that appeared in the Saturday Evening Post in 1933, the film narrates the explosive courtship and marriage of returned Irish-American emigrant Sean Thornton (John Wayne stepping outside of his usual casting) and feisty local beauty Mary Kate Danaher (Maureen O’Hara).

Though Ford largely expunged the political undertones of Walsh’s original story in favour of an idealised and stereotyped vision of rural Ireland, its massive global success has ensured that it has remained a key site of controversy around Irish cultural identity. Even if perhaps you don’t exactly recognise the Ireland of The Quiet Man, the charm that earned it two Oscars (Best Director and Best Cinematographer) is undeniable; it’s lush Technicolor countryside, heart-warming characters, and  passionate screen romance from Wayne and O’Hara have earned it a special place in the Irish film canon.

The restored 35mm print of The Quiet Man has been borrowed by the IFI Irish Film Archive from the UCLA Film Archive under the International Federation of Film Archives inter-archival loan scheme.

N.B Unfortunately due to circumstances beyond our control Maureen O’Hara is unable to attend the screening as previously advertised.

IFI’s Ford in Ireland Season runs from 10th-30th June. The full programme of films is available at www.ifi.ie

For images, interview requests and more information about the IFI’s John Ford’s Irish Films Season contact Patrick Stewart at the IFI Press Office on  01 679 5744 or pstewart@irishfilm.ie