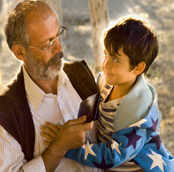 This small selection of recent German films, presented in association with the Goethe-Institut Irland, opens and closes with new works  by two of contemporary cinema’s finest directors, Volker Schlöndorff and Andreas Dresen, as well as featuring a host of emerging talents.

Schlöndorff was one of the leading lights of the so-called New German Cinema of the 1960s and ‘70s, and won an Oscar for his 1979 adaptation of Günter Grass’ The Tin Drum. It was while living in France and serving an apprenticeship to such French cinema giants as Louis Malle, Jean-Pierre Melville and Alain Resnais, that he learned about the dark episode from WW2 Occupied France that inspired his new film Calm at Sea. Set in a French internment camp this film about reprisal executions is scrupulously even-handed and unsentimental, but packs quite an emotional punch. The screening will be followed by a reception at the IFI provided by the Goethe-Institut Irland for all opening night ticketholders.

Less well known in this country but a key figure in German cinema for over a decade, Andreas Dresen has made a whole series of enormously courageous films that explore real-life issues with unflinching candour. Described as “a story about death that celebrates life,” Dresen’s latest, Stopped on Track, provides a compelling account of how family members cope when a husband and father is struck by a terminal illness. Winner of Un Certain Regard at Cannes 2011 and a clutch of Lolas (German Film Awards), this tightly researched and beautifully executed film is one not to miss.

The other films in the season are by emerging talents who are all worthy of attention. Christian Scwochow particularly impresses with Cracks in the Shell, a powerful psychodrama about a drama student landing a demanding lead role despite, or perhaps because of, her highly-strung and vulnerable nature. Another highlight of the season is Maggie Peren’s Colour of the Ocean, a thriller that provides multiple perspectives on the moral complexities of immigration. Set on the Canary Islands, a German tourist saves two immigrant lives. Yet this is only the start of her involvement that despite being well intentioned becomes decidedly more complicated as the story develops.

For more information and images please contact Patrick Stewart at the IFI Press Office (pstewart@irishfilm.ie or 01 679 5744).