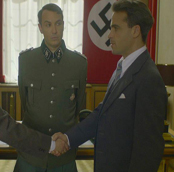 The Enigma of Frank Ryan

IFI Ireland on Sunday is delighted to present Desmond Bell’s dramatisation of the life of Frank Ryan (1902–1944), a new Irish drama that provides a sympathetic but searching portrait of a politically complex figure. Ryan, an IRA activist in Ireland, International Brigade Volunteer in Spain, and Nazi collaborator in Berlin, entered an agreement with a Nazi regime which he believed would assist in forging a united Ireland. But the former radical and internationalist paid a heavy price for this pact.

The film raises important questions about collaboration between the IRA and the Nazis in World War II, and opens up debate about Irish neutrality in that war. Featuring a striking lead performance from Dara Devaney, the drama incorporates archive film and Ryan’s original correspondence to create a compelling and textured portrait of the man.

Ireland on Sunday is our monthly showcase for new Irish Film, incorporating opportunities for discussion and feedback with the filmmakers. Director Desmond Bell will participate in a post-screening Q&A with Tommy Graham (Editor, History Ireland).

For more information please contact Patrick Stewart at the IFI Press Office on 01 679 5744 or pstewart@irishfilm.ie.