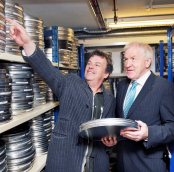 In November 2011, the IFI officially launched the IFI Irish Film Archive Preservation Fund to expand access to, and preservation of, our national film archive collection. An innovative partnership with NUI Maynooth presented the IFI with a unique opportunity to build a new custom built Research and Preservation Centre on campus.

The Irish Film Institute, together with NUI Maynooth and key funding partners the Department of Arts, Heritage and the Gaeltacht, Bord Scannán na hÉireann/the Irish Film Board and the Broadcasting Authority of Ireland, today announced plans for the development of this new Preservation and Research Centre at NUI Maynooth. The shortfall in funding has now been met, enabling the realisation of the Centre. The Centre will allow the IFI to ensure that future generations can continue to learn from, and enjoy, Ireland’s moving image heritage.

Jimmy Deenihan TD, Minister for Arts, Heritage and the Gaeltacht commented “The IFI Irish Film Archive holds great potential for use as a dynamic cross-curricular educational resource and can play a vital role in the area of media literacy. The partnership between the IFI and NUI Maynooth creates an exciting opportunity for these two organisations to work together to deliver a range of imaginative new projects that harness new technologies to reach as wide an audience as possible.”

This will be the first project to come to fruition as a result of this Fund. Eve-Anne Cullinan, Chairperson of the IFI said: “This exciting project will not only provide a secure home for the IFI Irish Film Archive collections ensuring their safety for the future, but crucially will facilitate research into ways in which digital technology can ensure the collections are widely accessible for many years to come by people in Ireland and internationally.”

Professor Philip Nolan, President of NUI Maynooth, said, “It is a privilege for NUI Maynooth to be involved in the IFI Research and Preservation Centre.  The IFI Irish Film Archive offers us unique insights into our culture, history and place in the world, and is a rich source for scholars and educators.   We look forward to a long partnership between IFI and NUI Maynooth.”

Michael O’Keeffe, Chief Executive of BAI, said “The Broadcasting Authority of Ireland (BAI) is pleased to lend its support to this important initiative. The BAI shares the belief that Ireland’s audiovisual heritage should be preserved and has worked with the IFI Irish Film Archive since 2006 to ensure that all projects funded by the Broadcasting Funding Scheme are archived. This year we will also announce further details of an exciting new scheme, The Broadcast Archiving Scheme, which will offer additional support towards the archiving and preservation of TV and radio content. We look forward to working with our industry partners and the audiovisual and broadcasting sectors on this exciting initiative.”

The IFI Irish Film Archive is custodian of one of Ireland’s most remarkable resources – our nation’s film. The IFI collection spans over one hundred years of stories from everyday life to the great achievements of Ireland’s filmmakers on the global stage. Collectively this material tells Ireland’s artistic, social and political story over the last century as well as being a record of Irish film culture.

For more photos from the official launch of the IFI Film Archive Preservation and Research Centre, visit our Facebook page.