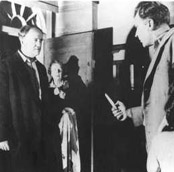 Monthly Must-See: Home is the Hero

Home is the Hero, adapted from Walter Macken’s stage play of the same name, is a dark, brooding family drama, a tale of Paddo O’Reilly, ‘the Goliath of Galway’, released from prison after a five-year conviction for killing the father of his son’s girlfriend. The IFI’s Monthly Must-See Cinema is a series of feature films from the IFI Irish Film Archive that were made in and about Ireland, showcasing highlights from Irish cinema.

The film, directed by Fielder Cook, provides a fine vehicle for the Abbey Theatre cast: Eileen Crowe, Joan O’Hara, Philip O’Flynn and Harry Brogan; for American Arthur Kennedy; and for Walter Macken himself in the powerfully muscular lead. As the Sunday Press review noted on the film’s release: “Paddo will surely rank as one of the greatest characterisations the screen has given us . . .  (the film) will bring Ardmore Studios into the front rank of film factories”. Watch out for unusual shooting locations Drumcondra, Phibsboro and the Grand Canal.

The film will be introduced by Fiach MacConghail, Director of the Abbey Theatre.

For more media information please contact Patrick Stewart at the IFI Press Office on 01 679 5744 or pstewart@irishfilm.ie.