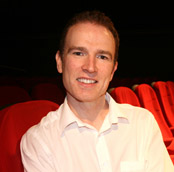 With over 12 years’ experience working in leading cultural organisations in Ireland and Australia, such as the Dublin Theatre Festival, Sydney Harbour Foreshore Authority, as well as IFI, Ross is currently Chairperson of Corn Exchange Theatre Company and a board member of Performance Corporation Theatre Company.

“Ross has a wealth of experience working in major cultural institutions both in Ireland and internationally and is passionate about leading the IFI into its next chapter, with exciting developments in IFI National, IFI International, the IFI Archive Preservation Centre and IFI Education Film Focus. We are looking forward also this year to marking 20 years at our home in Temple Bar, another milestone in the Institute’s long history dating back to 1943” said Eve-Anne Cullinan, Chairperson of IFI.

Since he joined the IFI in 2008 as Public Affairs and Marketing Director, Ross has played a key role in the recent developments resulting in a significant increase in audiences and strengthening of the IFI’s National and International cultural programmes. He has in particular played a lead role in new audience development, digital marketing, IFI Membership and fundraising strategies including the IFI Archive Preservation Fund. Working closely with the outgoing Director, he has played an important role in strengthening the IFI’s relationships with sponsors and cultural agencies, particularly in relation to international partnerships in the USA.

Prior to joining the IFI, Ross was Director of Marketing and Development at the Dublin Theatre Festival (2002-2008) where he achieved a significant impact on audience development and profile of the Festival. This included developing a major campaign for the 50th anniversary in 2007, curating the Family Season strand of the Festival’s programme, and the development of a strategy that resulted in securing a major title sponsor for the Festival. In his role at the Sydney Harbour Foreshore Authority in Australia, Ross curated the St. Patrick’s Festival programme in 2001, and developed the organisation’s funding development strategies.

Ross Keane said “I am delighted to be taking on the role of Director of the IFI and to be given this fantastic opportunity to lead such a dynamic organisation into its next exciting phase. With an exceptionally strong and dedicated team behind me, I am looking forwarding to embarking on this role, developing relationships with partners in film culture, education and archive, and applying my own creative vision to one of Ireland’s most popular and relevant arts organisations.”

Ross Keane replaces Sarah Glennie who is leaving to take up her new role as Director of IMMA in April 2012. Ross Keane will take up the position of IFI Director on April 16th 2012.

For more information, images and interview requests please contact Patrick Stewart at the IFI Press Office on 01 679 5744 or pstewart@irishfilm.ie.