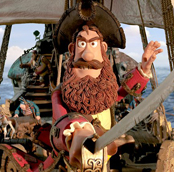 The IFI celebrates the success of Irish animation with Drawing Pictures, a day of workshops, screenings and discussion

The IFI presents a day-long event on April 14th focussing on the success of Irish animation, along with a special screening of The Pirates! In an Adventure with Scientists with special guest David Sproxton, Co-Founder of Aardman Animations. In the past few years Ireland has become a hub for the animation industry with companies such as Brown Bag (Octonauts, Granny O’Grimm, I’m a Happy Hugglewug), Boulder Media (Gumballs), Cartoon Saloon (The Secret of Kells) demonstrating a wealth of creativity and expertise, and gaining international attention. Irish animators are also being honoured with a special focus at the Annecy International Animated Film Festival. Drawing Pictures: Irish Animation Day celebrates these achievements and aims to bring audiences and animators together for a day of workshops, discussions and showcases at the IFI.

The day starts at 11am with a special programme of shorts curated by animator Steve Woods for the Annecy International Animated Film Festival 2012 and presented in association with the Screen Directors Guild of Ireland. It will include work from Brown Bag, Kavaleer and Cartoon Saloon.

At 12.45pm there will be a Panel Discussion on Animation in Ireland that brings together special guest Seamus Maloney (Aardman Animation Supervising Animator and creator of Sean Sheep), Steve Woods (Animator), Gerard O’Rourke (Monster), Sheila De Courcy (RTÉ), Dan Spencer (Pegbar) and Nora Twomey (Cartoon Saloon) for a discussion chaired by Gareth Lee (Ballyfermot College of Further Education Programme Leader in Animation). From 2.30pm there will be a chance to look at the future of Irish Animation with screenings and presentations from some new voices such as Giant Creative and Adrien Merigeau.

David Sproxton, co-founder of Aardman Animations ,will introduce a special 4pm screening of recent hit The Pirates! In an Adventure with Scientists and take part in a Q+A after the film, placing Irish animation in its broader international context. Also present will be Irish School of Animation graduate and Aardman Supervising Animator, Seamus Malone.

Tickets are €8 covering the events from 11am-3pm. Tickets for the 4pm screening of The Pirates! In an Adventure with Scientists are FREE but ticketed and reservation with the IFI Box Office on 01 6793477 is essential. IFI Animation Evening Course participants are entitled to reserve free passes to this full day of events.

For more information and interview requests with David Sproxton please contact Patrick Stewart at the IFI Press office on 01 679 5744 or email pstewart@irishfilm.ie.