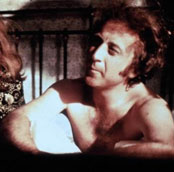 The IFI celebrates St. Patrick’s Day and remembers David Kelly with a screening of the Irish romantic comedy Quackser Fortune has a Cousin in the Bronx.

March’s Must-See Cinema from the IFI Irish Film Archive is Quackser Fortune has a Cousin in the Bronx (1970), presented in collaboration with the St. Patrick’s Day Festival. In one of the best-loved and most bizarre films in its collection, Gene Wilder plays a Dublin horse manure collector and salesman who falls in love with swinging young Trinity student Zazel (Margot Kidder). Initially they overcome their differences but soon Quackser’s oddities and Zazel’s class pull them apart. But when Quackser’s cousin in the Bronx passes away, leaving him a small inheritance, he sets off to find Zazel again. The two leads are supported by a terrific local cast including May Ollis, Eileen Colgan and the late David Kelly.