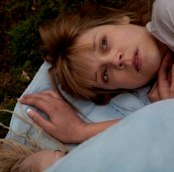 ‘The script started with a newspaper article about a young woman’s body that was found wrapped in a duvet in Northern Ireland. This image of the duvet around a body and a visual confusion between sleep and death stuck, and this is where sleepwalking entered the story. Glenn (Montgomery, co-writer) and I were fascinated by the implications for a character and story of a person who could be active or acted upon but not conscious (throwing up complications of responsibility) and would have no memory of what happened once awake again’ – Director Rebecca Daly talks about the writing process behind The Other Side Of Sleep which opens at the IFI on March 15th. Read more in our blog [here].

Join us on March 15th for the gala preview screening of The Other Side Of Sleep, followed by a Q&A with Rebecca Daly and Director of the Dublin Fringe Festival, Róise Goan.

The Other Side of Sleep is showing at the IFI as part of a season devoted to Fastnet Films.