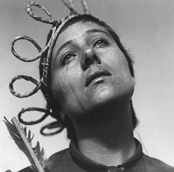 The IFI to present a major retrospective of Carl Theodor Dreyer (1889-1966), one of cinema’s most influential directors, from 1st-29th April 2012

Though several of Carl Theodor Dreyer’s films such as The Passion of Joan of Arc, Ordet and Vampyr remain reliably famous, a lack of cinematic exhibition has hampered a greater appreciation of his wider body of work. This April the IFI is undertaking a major retrospective of the Danish director’s films giving Irish audiences a unique opportunity to savour the diverse delights of one of cinema’s acknowledged masters.

Pete Walsh, the IFI Cinemas Manager said ‘Right from the start, Dreyer sought to establish a quality cinema that could stand comparison with the other arts. His inspiration came from literature and the theatre, but his work was always highly cinematic and drew from such masters of the silent screen as Sjöström, Stiller, Eisenstein and Griffith. He himself was a master of silent cinema who also conquered the sound film. His work with actors and his use of the human face was astonishing and exerted a big influence on a filmmaker like Ingmar Bergman. His range was also much greater than generally acknowledged, with his relatively short filmography (14 features) including comedies, romances, dramas and tragedies. He started out working in a highly commercial studio system whose rigid codes and working methods he often managed to subvert. Many of his later films were made as independent productions that afforded nearly total artistic freedom. He never saw himself as an experimental or avant-garde filmmaker, but he has often been acclaimed as such and for good reason. What the critic David Bordwell described as “the downright strangeness of Dreyer’s work” continues to fascinate and challenge audiences and critics alike.’’

The season includes the three masterpieces of the latter part of Dreyer’s career which spanned from deep into the silent era right through to the 1960s. There is a full week’s re-release of Ordet (The Word), perhaps the greatest triumph of Dreyer’s career, which wittily explores pride, prejudice and pretensions during one Jutland family’s crisis of faith and values.  Dreyer’s Day of Wrath is the moving tale of illicit passion during the 17th century witch trials in Denmark while his last film Gertrud is the coolly stylised study of a proud and passionate married woman loved, but not nearly enough she insists, by four different men.

The astonishing performance of Maria Falconetti and its daringly innovative presentation by Dreyer in The Passion of Joan of Arc form a true masterpiece – a silent study of suffering, supplication and solitude, featuring what Tom Milne memorably called ‘virtually a symphony of faces’. Based on the records of Joan’s trial but concentrating on the final day of her life, it’s a film that is at once highly experimental but utterly accessible.

Vampyr brought Dreyer’s experimental leanings to a head with spectacular results. The camerawork, editing and narrative all combine to deliver a profoundly unsettling experience to the viewer. This nightmarishly strange film will be screened in April and once again on May 18th when it will be accompanied by an original live score from Steven Severin (solo artist and founding member of Siouxsie and the Banshees).

Even those lucky enough to have seen either the aforementioned silent classics or the three extraordinary late talkie masterpieces haven’t seen the full picture as his most widely screened films give him an unjustified reputation as a demanding and overly serious director. From the pre-talkie era, a richer and different picture emerges with a wealth of romances (Once Upon a Time, Michael, The Bride of Glomdal), comedies (The Parson’s Widow, Master of the House) and literary adaptations (Love One Another) showcasing the innovative simplicity of his approach, the growing influence of Expressionism on his work and a commitment to the subtlety of emotional nuances.

For images, media information or interview requests please contact Patrick Stewart at the IFI Press Office on 01 679 5744 or pstewart@irishfilm.ie.