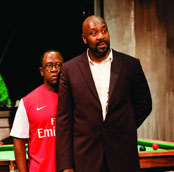 Tickets on sale for Lenny Henry in Comedy of Errors

Tickets are now on sale for National Theatre Live’s The Comedy of Errors by William Shakespeare and starring Lenny Henry on 1st March at 6.45pm

Antipholus of Syracuse (Lenny Henry) and his servant Dromio arrive in Ephesus in search of their twin brothers, from whom they were separated at birth. Consistently mistaken for their identical twins, for one mad-cap day this buzzing metropolis appears as a place of wonderment and terror, where baffling gifts and unexplained hostilities abound. It’s not long before their brothers are equally confused by the strange occurrences swirling around them in a city they thought they knew. Meanwhile, Aegeon, father to the Antipholus twins, has been captured while searching for his sons and, as an illegal immigrant to Ephesus, is facing a heavy punishment as soon as the Sun sets.

Tickets cost €15. Tickets must be collected by 6.45pm, with the live performance starting strictly at 7pm. Duration 2hrs 45 minutes approx. including 20 minute interval.