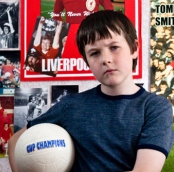 In the run up to the Academy Awards ceremony, the IFI is presenting two weeks of free lunchtime screenings of Pentecost. The film is a leading hope for Irish Oscar glory this year, one of two short Irish films nominated in the Short Film (Live Action) category, and this is a great chance for Irish film fans to see and support the film on the big screen before Oscar night. The film will run at the IFI at 1.10pm on February 13th to 17th and 19th to 26th. Tickets will be free, on a first-come-first served basis, and can be reserved through the IFI Box Office.

Pentecost, directed by Peter McDonald, is a delightfully funny story of an eleven-year-old football-obsessed altar boy Damien Lynch (Scott Graham) who has been banned from playing and watching his favourite sport after accidentally knocking over Father O’Toole (Don Wycherly) during mass. Set during the excitement of the 1977 European Cup, Damien is offered a reprieve by his father (Michael McElhatton) – he can watch the final if he gets through his altar duties without a hitch. He must choose whether to accept the status quo or never see Liverpool play again.