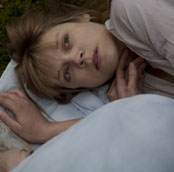 The Other Side of Sleep is an acclaimed debut feature by Irish filmmaker Rebecca Daly that features a powerful and compelling performance from Antonia Campbell-Hughes, one of this year’s Berlin International Film Festival’s Shooting Stars award recipients. This hotly-anticipated suspense drama made history at its World Premiere at the Cannes Film Festival in 2011 as it was the first film directed by an Irish woman to be selected for inclusion in the Festival. The film, produced by Fastnet Films, also screened in competition at the Toronto International Film Festival and was nominated for Best Director and Best Actress at the Irish Film and Television Awards.

A sleepwalker since childhood, Arlene works in the local factory of the small Irish rural town she grew up in. When a young woman is found dead in the woods, Arlene is forced to her confront a tragedy from her own childhood. Echoes of the past inexorably draw Arlene towards the tragedy; she becomes close to the victim’s grieving sister (Vicky Joyce) and family while at the same time finding herself entangled with the woman’s lover (newcomer Sam Keeley) and the case’s main suspect. Deprived of sleep and having to barricade herself in at night, Arlene’s sleepwalking and waking reality start to blur as the community searches for someone to blame.

The Other Side of Sleep is Rebecca Daly’s first feature, having come to prominence with the success of her short film Joyriders that picked up Best Irish Short at the Galway Film Fleadh and a Best Short IFTA. Her follow-up short Hum was selected as one of the finalists for the Berlin Today Award in 2010. Inspired by real-life disappearances she read about in the media and memories of her home town’s reaction to a similar tragedy when she was a teenager, Daly creates a unique narrative that captures the trauma of loss, the discovery of vulnerability, and the haunting image of a life frozen in time. The film also provides a sensitive artistic juxtaposition to the sometimes lurid media interest in murders and abductions.

Director Rebecca Daly said ‘With The Other Side of Sleep, I wanted to make a film that got under the skin of a thriller, that looked at grief and loss as confusing, haunting, terrifying. I wanted to get at that feeling of walking down a deserted road at night and suddenly becoming aware of your exposure, your vulnerability.

Leading a fantastic ensemble cast in The Other Side of Sleep, as well as being named one of Berlin International Film Festival’s Shooting Stars, Antonia Campbell-Hughes’ career is at a high point. After her success in Jack Dee’s TV comedy Lead Balloon, the former international fashion designer went on to create her own show Bluebell Welch for MTV as well as being cast in Jane Campion’s Bright Star (2009). This year she stars in another upcoming cinema release, Lotus Eaters. Other key cast members include two veteran Irish actresses of stage and screen, Olwen Fouere and Cathy Belton, as well as hot newcomer Sam Keeley who after being selected at an open casting for The Other Side of Sleep, has gone on to star in RTE series RAW as well as Lenny Abrahamson’s forthcoming film What Richard Did.

The Other Side of Sleep is released nationwide from 16th March 2012. There will be a gala preview of the film at 6.20pm on 15th March at the IFI in Dublin followed by a public interview with director Rebecca Daly.

For more information, interviews, clips and images please contact Patrick Stewart at the IFI Press Office, on 01 679 5744 or email pstewart@irishfilm.ie.