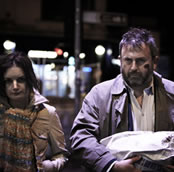 This debut feature from shorts filmmaker, writer and theatre director John McIlduff is a darkly comic road movie that follows Eddie (Nigel O’Neill), a 50-year old ex-accountant, and Liz (Aoife Duffin), his junkie son’s girlfriend, as they travel across Northern Ireland in a bid  to pick up a lamb and thus save the son’s neck.

En route, they fumble their way through a series of comic, tragic and disturbing adventures. Liz struggles with her own drug addiction, crippling sensitivity and desire to connect with her disabled son who lives with foster parents. Eddie, an overweight and depressed ex-accountant, does his best to assume the role of drug trafficker but his concern for the lamb’s welfare and his birdwatching hardly help his attempt at a tough-guy image.

Director John McIlduff describes Behold the Lamb as a quintessentially Northern Irish film “not in terms of conflict and politics…but (in terms of) the colours and textures of the landscape, the darkness of our humour and our stern hearts that yearn to open.”  Aoife Duffin, a fast rising star in Irish theatre, made her film debut in Behold the Lamb and was nominated for an IFTA in the Best Actress (Film) for her performance.

John McIlduff will participate in a post-screening Q+A.

Ireland on Sunday is the IFI’s monthly showcase of new Irish film.

For images and more media information please contact Patrick Stewart at the IFI Press Office on 01 679 5744 or pstewart@irishfilm.ie.