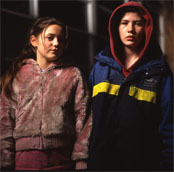 A season of Fastnet Films at the IFI with special guests including Jim Sheridan, Lance Daly and Rebecca Daly.

Dublin-based Fastnet Films, consisting of producers Macdara Kelleher and Morgan Bushe, plus director Lance Daly, are at the forefront of an exciting new wave of Irish cinema; overseeing noteworthy features, television programmes and shorts at a dizzying rate. In the process, Fastnet Films are nurturing a stable of remarkable home-grown talent, like filmmakers Rebecca Daly, Andrew Legge, Ross McDonnell and Lance Daly himself, while also participating in many European co-productions. In a few short years they’ve enjoyed both critical and box-office success, been feted at Toronto, Tribeca and Cannes, and bagged numerous international awards. The IFI are marking the 16th March release of Fastnet Films’ The Other Side of Sleep by Rebecca Daly, a hit at Cannes in 2011, with a season from Fastnet’s already formidable body of work.

Fastnet Film’s rise to prominence was confirmed in 2008 with the arrival of Lance Daly’s Kisses. This small, perfectly formed story of two misbegotten suburban teens, Dylan (Shane Curry) and Kylie (Kelly O’Neill) and their Dublin misadventures is infused with magic realism and much charm. Leading Irish filmmaker Jim Sheridan will interview director Lance Daly in a post-screening Q&A.

Fastnet’s Circus Fantasticus is a surreal, dialogue-free, Irish Slovenian co-production by Janez Burger and an ode to the transcendence of entertainment. Set in an unnamed desolate Balkan war zone, a family struggles to survive after the murder of their civilian mother. Then one night they’re paid a visit by a mysterious travelling circus troupe and suddenly it’s magic time! The Fastnet Films season also includes the first Irish-Hungarian co-production, The Investigator, a droll, clever neo-noir in which an amateur detective investigates a murder he himself committed.

Stephen Rea offers one of his finest screen performances in Polish filmmaker Urszula Antoniak’s meditative two-hander Nothing Personal, set amid the wilds of Connemara. A solitary widower (Rea) offers a safe haven to a grieving Dutchwoman (Lotte Verbeek) on the understanding that any meaningful relationship is off-limits. (Please note, Stephen Rea will no longer be  able to introduce the screening as was previously advertised.)

Along with dramatic successes, Fastnet Films has also been part of the resurgence of Irish documentary making that has taken place over the past few years. Ross McDonnell’s Colony investigates the mysterious collapse of bee colonies that is taking place across the Western World, and highlights the crucial and increasingly industrialised role of bees in producing our food. Andrew Gallimore’s Babyface Goes to Hollywood follows forgotten Irish boxing legend Jimmy McLarnin, aka ‘The Babyfaced Assassin’, who battled his way to fortune (and a heap of controversy) from his humble beginnings in County Down in the 1940s.

With each feature length screening there is an accompanying short film from Fastnet Film’s impressive catalogue.

The screening will be followed by a Q+A with award-winning Sound Designer, Robert Flanagan.

+ Short film Remember Me, My Ghost

+ Short film If I Should Fall Behind.

Followed by a Q+A with Lance Daly, hosted by Jim Sheridan

The Other Side of Sleep is released at the IFI and selected cinemas on the 16th March 2012. There will be a gala preview of the film at the IFI on 15th March at 6.20pm followed by a Q+A with the film’s director Rebecca Daly.

Tickets will be available from the 27th February from the IFI Box Office on 01 679 3477 or online at www.ifi.ie

For more information please contact Patrick Stewart at the IFI Press Office on 01 679 5744 or email pstewart@irishfilm.ie