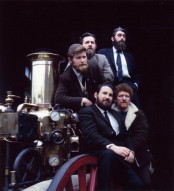 In celebration of Trad Fest 2012 the IFI presents two remarkable programmes of films about traditional Irish music. It’s the perfect way to unwind between festival gigs and delve into some of the history of Irish traditional music.

First off there’s The Dubliners in the Rare Oul Times, a programme of rarely-seen films about The Dubliners. Seven Drunken Nights, is a pop-video made by renowned music documentarian Peter Whitehead for BBC’s Top of the Pops in 1967. The Dubliners’ Dublin is an affectionate tour of Dublin hosted by Ronnie Drew and liberally under-scored by Dubliners’ music. The film, produced by Riverdance’s John McColgan and former IFCO Director John Kelleher was made as part of Dublin’s millennium celebrations in 1988 and provides a snapshot of a familiar but much-changed city.

The second programme features La Rêve Celtique (The Celtic Dream) from 1978 and Bodhrán from 1974. La Rêve Celtique is a fascinating French look at Irish traditional musicians in ethereal Irish landscapes and in O’Connor’s Pub in Doolin. Frederick Rossif’s film, produced by Tom Hayes, features performances from the Mummers of Lady’s Island, The Choir of Cúil Aodha, Junior Crehen, Máire Ni Ceilleachair, Nicholas Toibin and Peter Flaherty. Bodhrán, directed by Tom Hayes with support from Roinn na Gaeltachta explores the history and popularity of the bodhrán in various locations around Ireland.