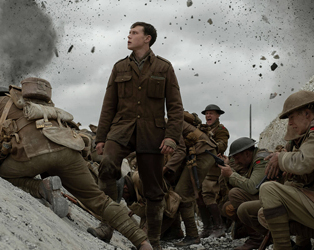 This film was released on 10th January 2020, and is no longer screening.

Almost three years into World War I, British Lance Corporals Schofield (George MacKay) and Blake (Dean-Charles Chapman) are given a mission to travel across No Man’s Land and into territory recently ceded by the German forces in order to reach the front line. Believing the enemy to be in retreat, two battalions comprising 1,600 men are preparing an attack that will lead to their slaughter as part of a carefully planned ruse, unless the two men reach them in time and pass along the order to stand down. In two sections, the film unfolds in real time, with each part seemingly consisting of a single and unbroken take. Not only does this stand as an extremely impressive technical feat, but it also makes for a gripping and immersive experience as the characters are propelled from one tense situation to another.