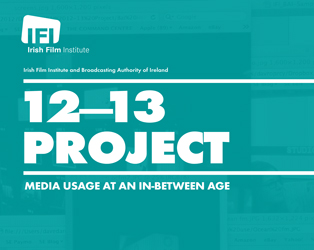 The 12-13 Project: Media Usage at an in-between age

The 12-13 Project was carried out by IFI between September 2012 and May 2013, with the support of the BAI and the Arts Council. The aim of the project was to map media usage among young people between the ages of 12 and 13, and to investigate whether or not media literacy interventions could have any direct impact on their subsequent media habits and attitudes.

The project used Media Logs to survey the ways that 12-13 year olds are using the media. Results showed that while the typical 12-13 year old already has a 3G/Wi-Fi enabled phone used for texting, surfing and social networking, 12-13 year olds are using YouTube and Facebook, even though the latter has an official age bar to under-13s. They watch an hour of television a day but this is trumped by the average 65 minutes a day spent on their games console. As this age group is at a key junction in their education – moving from primary to secondary school, media skills can facilitate this transition to new subjects, new learning styles and situations.