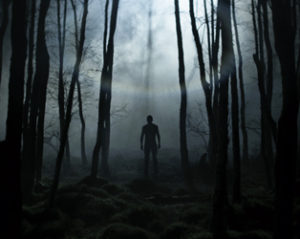 Director Lorcan Finnegan will join us after the 18.15 screening on Friday May 5th for a Q&A, hosted by Mark Sheridan.

Having begun his task alone, the location has unsettled Eric, a situation not alleviated by the arrival of assistant and mistress Olivia (Niamh Algar). Instead, his mental state worsens as the woods come to seem increasingly threatening. Suffused with elements taken from Irish mythology, Without Name, while undoubtedly taking its place in the folk horror tradition, is equally interested in its central character’s psychological isolation from both those around him and his environment, to which he must eventually adapt or succumb. It makes for hypnotic, unsettling viewing.

The eerie Foxes (2012), Lorcan Finnegan’s acclaimed, award-winning short, will screen before Without Name.