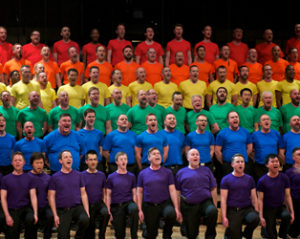 Saar Moaz is an affable forty-year-old gay Israeli man living in London who sings regularly in the Gay Men’s Chorus; he’s also living with the burden of being HIV+ and the rejection he experienced at the hands of his conservative family who expelled him from their kibbutz many years ago on account of his sexual orientation. Saar may be living freely in London, but he yearns to reconnect with his estranged siblings; Tomer and Barak Heymann’s exceptionally moving film – a deserving Audience Award winner at Berlin – charts his journey home to confront the resentment and prejudices that saw him flee his homeland.

This special preview screening is followed by a Q&A with the film’s directors and star Saar Maoz, and a performance by the London Gay Men’s Chorus, broadcast live from London’s Barbican Centre and hosted by Julian Clary.