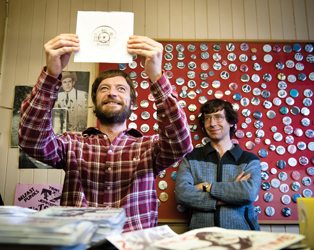 During St. Patrick’s weekend, and throughout the month of March, we have plenty of activity, deals and offers across our cinemas, IFI Film Shop and IFI Café Bar to celebrate Irish film and its wonderful part in our culture!

As you know, we LOVE Irish film at the IFI. So we thought we’d find out what YOUR favourite Irish film of recent times is! Plus, there’s a prize from the IFI Film Shop to boot. Simply pick your favourite of the 20 contemporary Irish films on our list before midnight on St. Patrick’s Day. We’ll then pick one winner randomly who’ll get a DVD copy of the top three. Nice! Feel free to comment with any other Irish film suggestion that gets your vote, and we’ll put your name in the hat too! #weloveirishfilm

GOOD VIBRATIONS (from March 29th)
Beset by sectarian conflict, Belfast in the late 1970s hardly seemed like fertile ground for an onrush of musical energy, but thanks to the unbridled enthusiasm of mover and shaker Terri Hooley, the local punk scene raised two fingers in the face of the Troubles. Good Vibrations (pictured above; showing from March 29th) looks back on those near-mythical days with this affectionate and witty celluloid tribute. IFI FAMILY: THE SECRET OF KELLS (March 16th, 11.00)
Looking for something to bring the kids to? Our IFI Family screening on Saturday, March 16th (11.00) is the Oscar-nominated animation The Secret of Kells from Kilkenny’s Cartoon Saloon. A stunning film for all the family. (Discounted family ticket prices.)

MONTHLY MUST-SEE CINEMA: SHELLSHOCK ROCK & SELF-CONSCIOUS OVER YOU (March 30th, 16.10)
Prompted by the release of new feature Good Vibrations, we are delighted to present two films from master documentarian John T. Davis which document the men, music and mayhem of Ulster punk in the late 1970s. Shellshock Rock and Self-Conscious Over You are showing as part of our Monthly Must-See Cinema from the IFI Irish Film Archive on Saturday, March 30th at 16.10. IRELAND ON SUNDAY: ART WILL SAVE THE WORLD (March 10th, 13.00)
Ireland on Sunday, our monthly showcase for new Irish film, will screen Niall McCann’s energetic first feature, Art Will Save the World, which celebrates singer-songwriter, novelist and artist Luke Haines (one of the founding members of The Auteurs). McCann will take part in a Q&A following this screening on Sunday, March 10th, 13.00.

AFTERNOON TALK: IRISH FOLK FURNITURE (March 13th, 16.00)
Irish Folk Furniture recently scooped the Best Animation Award at the Sundance Film Festival. This warm and witty film from rural Tipperary follows the restoration of traditional Irish furniture with a stop-motion twist. In this month’s Afternoon Talk (free but ticketed), it will be screened with Donoghue’s previous short A Film From My Parish – 6 Farms and followed by a discussion with the director about his distinctive approach to filmmaking. (The short film will be shown before every screening of Caesar Must Die until March 14th. Normal cinema ticket prices apply.)

ARCHIVE AT LUNCHTIME
Throughout March, we are running FREE screenings celebrating Ireland’s Presidency of the EU (January – June 2013) in our Archive at Lunchtime slots (Mondays, Wednesdays and double bills on Saturdays). Watch short films exploring impressions of Ireland and Europe in film from the IFI Irish Film Archive. (Free but ticketed.) If you’re ambling around Temple Bar and fancy browsing some of the best of Irish films on DVD, then why not visit the IFI Film Shop? From contemporary releases and documentaries such as Hunger, The Wind that Shakes the Barley, What Richard Did, Once and Tim Robinson – Connemara, to classic features such as My Left Foot, Ryan’s Daughter, Strumpet City and Man of Aran, you will find whatever you’re looking for here! Staff at the IFI Film Shop would be delighted to help with any specialist searches. We’ll also be running some competitions and special offers in March so make sure to follow the IFI Film Shop on Twitter (@IFI_Filmshop) for regular updates! Why not drop in to the IFI Café Bar during the bank holiday weekend and avail of our special offer – for just €13.95, enjoy either traditional Bacon and Cabbage or Irish Stew, with a pint of the black stuff! (Offer available March 16th – 18th.)

A little further from home, IFI International, with the support of Culture Ireland, is teaming up with cultural partners across the EU to mount a major programme of Irish film during Ireland’s EU Presidency, running from January to June 2013. Kicking off on St. Patrick’s Day (March 17th) in Flagey, Brussels with a screening of Irish Destiny, accompanied by a magnificent score written by Micheál Ó Súilleabháin and performed by a live orchestra of local musicians, the IFI European tour includes screenings of historic Irish films from the IFI Irish Film Archive in Paris, London, Berlin, Madrid and Brussels; a major focus on Jim Sheridan featuring both his work and influences; a season of the best contemporary Irish documentary; programmes of Irish shorts, and much more.