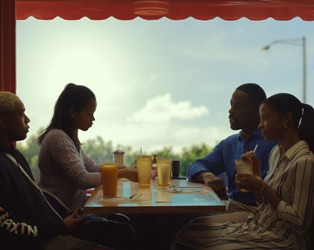 18-year-old Tyler (Kelvin Harrison Jr) seems destined for greatness; he has a privileged family to support him, a loving girlfriend (Alexa Demie), and a coveted position on the high school wrestling team. But there are cracks beneath the gleaming façade. His father is a disciplinarian who pushes Tyler to his limits, his girlfriend is worried about their future after some troubling news, and he has a nagging shoulder injury for which he is self-medicating a little too much. As the pressure mounts, the stage is set for tragedy. Structurally ambitious – an invigorating first half gives way to a more contemplative second – Waves is an immersive, visually dazzling cinematic experience, with a throbbing soundtrack from Trent Reznor and Atticus Ross, complemented by tracks from the likes of Animal Collective, Frank Ocean, and Radiohead.