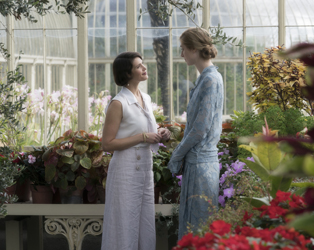 Vita and Virginia details the intimate relationship between literary trailblazer Virginia Woolf (Elizabeth Debicki) and her muse, the novelist and poet Vita Sackville-West (Gemma Arterton). Drawing on their passionate correspondence, the film celebrates the unconventional and intoxicating relationship which flourished within the sexually liberated Bloomsbury Set, provoking the opprobrium of their husbands and Vita’s overbearing mother (Isabella Rossellini).

The film is punctuated by episodes of Virginia’s psychosis creatively rendered as visual metaphors; the focus however is not on her well-publicised mania but rather on the relationship that emboldened her and inspired her modernist novel Orlando: A Biography.

Debicki and Arterton create fully-fleshed opposites in this meticulously designed period drama with a refreshingly modern score. Director Chanya Button has created a timeless love story that is contemporary both in its style and sensibility.