VITA AND VIRGINIA (FEAST YOUR EYES)

Vita and Virginia is also on general release from July 5th.

July’s pairing of a new release and a specially devised main course menu will be Chanya Button’s Vita and Virginia, followed by a specially created main
course in the IFI Café Bar.

Vita and Virginia details the intimate relationship between literary trailblazer Virginia Woolf (Elizabeth Debicki) and her muse, the novelist and poet Vita Sackville- West (Gemma Arterton). Drawing on  their passionate correspondence, the film celebrates the unconventional and intoxicating relationship which flourished within the sexually-liberated Bloomsbury Set, provoking the opprobrium of their husbands and Vita’s overbearing mother (Isabella Rossellini). Debicki and Arterton  create fully-fleshed opposites in this meticulously designed period drama with a refreshingly modern score. 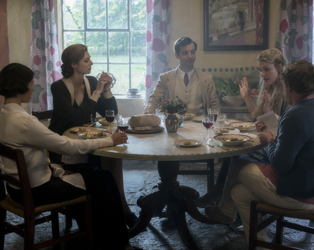