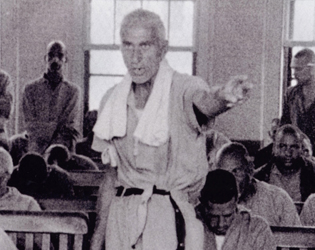 September’s Bigger Picture offering is a rare opportunity to experience one of the most acclaimed and controversial documentaries of all time.

Frederick Wiseman, the great chronicler of American institutions and systems, made an auspicious début in 1967 with Titicut Follies, a shocking glimpse inside the State Hospital for the Criminally Insane at Bridgewater, Massachusetts, whose distressed inmates are brutally mistreated by casually inhumane wardens. The film, whose title refers to a musical performance of the inmates, was not deemed fit for public screenings by the Supreme Court until 1991.

This screening will be introduced by film editor, and director of The Farthest, Emer Reynolds.