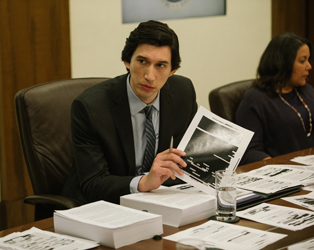 This film was released on Friday 15th November 2019 and is no longer screening.

In the immediate aftermath of 9/11, the Bush administration authorised the CIA in the use of ‘enhanced interrogation techniques’ – a euphemism for what was effectively torture – to extract information from suspects. The Report details the Senate Intelligence Committee’s investigation, led by Daniel Jones (Adam Driver), acting under the authority of Senator Diane Feinstein (Annette Bening), to expose the treatment of detainees at so-called black sites.

Making his feature debut, veteran screenwriter Scott Z. Burns eschews sensationalism in his sober, yet thoroughly engrossing approach to the incendiary subject matter, focusing on the procedural rigours of the five year investigation, and the seemingly insurmountable obstacles Jones faced in delivering his 7,000 page report.