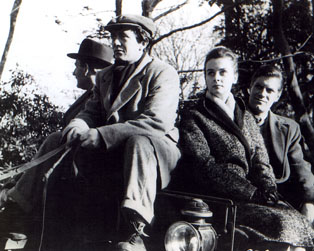 Twenty years after the shooting of IRA Commandant Jack Carberry by the Black and Tans, the villagers of Ballymorgan plan to erect a statue in his honour. However, the arrival of hapless English hibernophile Crispin Brown (Leslie Phillips), and the returns of sophisticated emigré Maire McRoarty (Audrey Dalton) and student priest Conor Heaphy (Norman Rodway) trigger the unravelling of the mythology surrounding Carberry and Ireland’s past.

This caustic comedy, adapted from Louis D’Alton’s popular stage play, is the first Irish feature film to be directed by a woman, English filmmaker Muriel Box. It is not just a critique of the past but a complex comment on an emergent modern Ireland. The film boasts a fine supporting cast of Abbey Players (Milo O’Shea, Harry Brogan and Hilton Edwards) and features locations in Chapelizod, Wicklow Town and Ardmore.