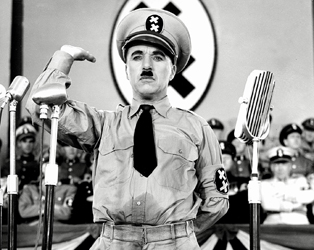 What makes for great satire? In a fake news climate, there is more need than ever for political satirists who are unafraid to call out falseness and media hype. Chaplin’s film, bold and highly provocative on its release at the start of World War II, famously sent up Hitler, just before the reality of his campaign became widely known.

Already beloved as The Little Tramp, Chaplin drew on clowning, gags and pantomime for this absurd creation, leading to the famous monologue at the end, recently given new attention by U2.

Satirist, columnist and impressionist Oliver Callan will talk about the impact of this film, and how good political satire must veer close to the edge in order to make any impact.