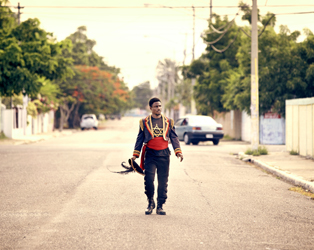 In the blackly brilliant Four Lions (2010), director and renowned satirist Chris Morris (The Day Today, Brass Eye) depicted the “Dad’s Army side to terrorism” with the story of a group of young British Muslim men who become radicalised into becoming suicide bombers.

The Day Shall Come puts its scathing focus on the activities of American law enforcement in manipulating potential figures of interest into seemingly credible threats. Moses (Marchánt Davis), along with wife Venus (Danielle Brooks), offers his three loyal followers a peaceful way of life. The group is broke, anti-gun, and led by a man with mental health issues, but are nevertheless targeted by an ambitious FBI agent (Anna Kendrick) eager to impress her ruthless boss (Denis O’Hare).

The language and humour are typical of Morris, as is the vein of anger throughout, as events spiral out of control.