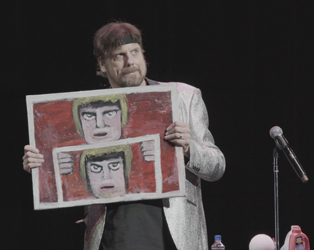 This film was released on Friday 22nd November 2019 and is no longer screening.

The lines between illusion and reality become hopelessly blurred for director Benjamin Berman when he embarks upon documenting the comeback tour of The Amazing Johnathan, a once-famous celebrity magician-comedian who, diagnosed with a terminal illness in 2014 and given a year to live, retired from public life, only to find himself still alive three years later.

With filming underway, the mercurial Johnathan drops a bombshell which forces Berman to choose between giving up on the project, or embracing the unconventional possibilities it affords, resulting in an unclassifiable, meta-textual work that deconstructs and questions the principles of documentary filmmaking. Issues of negotiation and access become the central threads that reveal, and further cloud, our understanding of the elusive protagonist. Berman’s debut feature is a wild ride that careens off the rails in highly entertaining and unexpected ways.