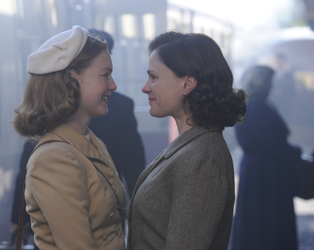 This film was released on Friday 19th July 2019 and is no longer screening.

In a small Scottish town in the 1950s, young mother Lydia (Holliday Grainger) is struggling to pay the rent as she raises her son, Charlie, whose father returned from the war but never returned to them. When they finally get evicted, the local doctor Jean (Anna Paquin), who has recently come back to take over her deceased father’s medical practice, comes to the rescue providing accommodation and work while also igniting a new passion for beekeeping in Charlie. As the three of them breathe new life into the old doctor’s house an unexpected romance blossoms between Lydia and Jean, but in a small town where secrets are hard to keep, the consequences of their love soon become clear.

Director Annabel Jankel weaves a tale of forbidden love in this romantic period drama based on the novel by Fiona Shaw.