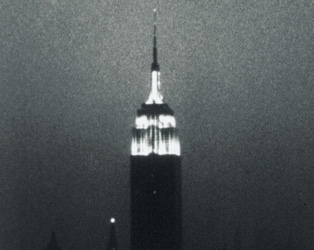 The screening will be followed by a Q&A with Chris Brokaw and Matthew Nolan.

Over a period of 50 years, Hutton made a series of short silent films, often in black and white, and primarily of landscapes and cities. He likened the films to paintings, and described watching them as ‘a little like daydreaming’.

His concerns about information overload even in the 1970s were uniquely prescient. Brokaw and Nolan seek to explore the questions raised by these films about how we take in information with an evening alternating films, including Boston Fire, New York Portrait #1, Study of a River, Landscape (for Manon), and In Titan’s Goblet, in their original/silent state with ones featuring new live scores for electric guitars and electronics.