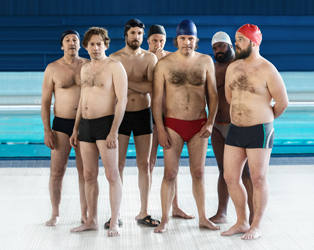 This film was released on Tuesday 1st January 2019 and is no longer screening.

Bertrand, an unemployed family man having a midlife crisis, joins an amateur male synchronised swimming team in this heart-warming comedy.Bertrand is not the only one in crisis, and a bond forms amongst the middle-aged men as they tackle their demons by committing to the most unlikely of public acts. Inspired by a documentary about a group of Swedish synchronized swimmers, actor-director Gilles Lellouche has assembled an all-star cast of non-sculpted bodies, including Mathieu Amalric, Guillaume Canet, Benoît Poelvoorde, Jean-Hugues Anglade and Marina Foïs, for this energetic comedy with a feel-good 1980’s soundtrack.