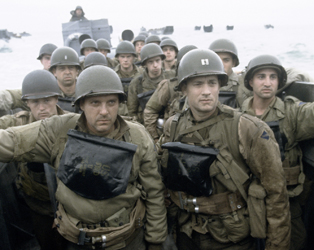 Marking the 75th anniversary of the D-Day landings at Normandy that marked a decisive turning point in favour of the Allied Forces during World War II, Steven Spielberg’s epic recounting of the invasion returns to cinemas for a special event screening. Following a long and terrifyingly visceral opening sequence of American soldiers landing on Omaha Beach (filmed in Wexford), Captain Miller (Tom Hanks) assembles the remnants of his company to locate one Private James Ryan and send him home.

After the carnage of the landings, Ryan is the last survivor of four brothers, and military brass see public relations potential in his compassionate return to his grieving parents. The film presents warfare utterly without glamour, dispelling any romantic illusions audiences may have about the nature of D-Day, and instead immersing them in a world of tired soldiers just trying to survive.