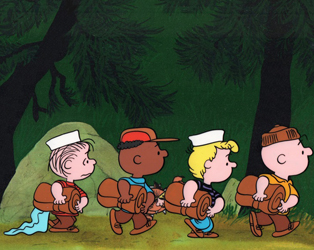 The much-loved cartoon Peanuts was originally brought to life back in the 1950s for a weekly newspaper comic strip by its creator Charles M Schulz.

Starting out with a small boy, Charlie Brown, the cast expanded to include everyone’s favourite dog, Snoopy, and then a succession of friends, among them Peppermint Patty, Woodstock and Frieda. Offering humour along with social commentary, Schulz’s strip continued
until his death in 2000, with the film adaptations winning over new audiences.

In this instalment, the gang gets packed off to summer camp where they take on some wild rapids and a bunch of cheating bullies in a fiercesome rafting race. Lots of laughs and friendship, reminding us why Peanuts remains the most popular comic strip ever.