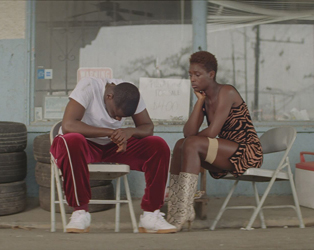 This film was released on 31st January 2020, and is no longer screening.

After connecting on Tinder, defence attorney Queen (a breakout performance from Jodie Turner-Smith) and retail worker Slim (Daniel Kaluuya) meet for an awkward first date. As he is driving her home, they are pulled over by a policeman who becomes needlessly aggressive. The situation escalates, and he is shot with his own gun. The two strangers go on the run, fearing the consequences of their actions, regardless of how justifiable the actions in self-defence may have been. As they seek refuge across the country they plan to leave in order to secure their futures, they begin to open up to each other in a fledgling romance, all while becoming heroes to some and villains to others. With echoes of Bonnie and Clyde (Arthur Penn, 1967) and Thelma & Louise (Ridley Scott, 1991), this is a lyrical and timely film.