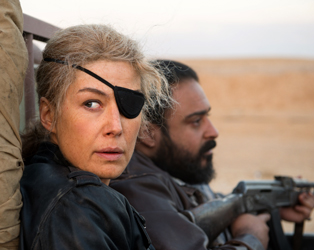 This film was released on Friday 15th February 2019 and is no longer screening.

IFI FILM CLUB – Join members of the IFI team for a discussion following the 18.20 screening on Tuesday 19th.

Having directed acclaimed documentaries about some of the world’s most dangerous places — Cartel Land (2015) and City of Ghosts (2017) — Matthew Heineman makes an apt feature debut with the story of Marie Colvin, the Sunday Times war correspondent who died in 2012 covering the atrocities of the Syrian war.

Rosamund Pike immerses herself in the role of the outspoken journalist with the trademark eyepatch whose unconventional approach to reporting on the human cost of war, aided by her professional partnership with photojournalist Paul Conroy (Jamie Dornan), brought her international recognition, whilst privately she struggled to cope with PTSD and alcoholism.

Based on a Vanity Fair article, Heineman brings authenticity and urgency to this portrait of a towering figure in contemporary journalism.