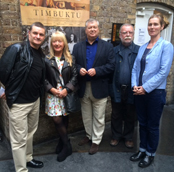 We were delighted to welcome director Joe Lee with Lorraine Kennedy and Bill Whelan to talk about the making of their documentary Fortune’s Wheel at the IFI, hosted by Sunniva O’Flynn (Head of Irish Film Programming) on Friday, June 5th. The screening was introduced by RTÉ Radio 1’s Joe Duffy. Listen to both below!

About the film
Fortune’s Wheel brings to life the remarkable, implausible story of a Fairview lion-tamer in Dublin in the 1950s. Bill Stephens was an ordinary young Dubliner, with an extraordinary dream – to become a skilled animal trainer and a big circus star. The dream became a reality for him and a nightmare for the people of Fairview when one of his lions escaped onto the crowded streets in November 1951. This is also a love story about Bill’s teenage marriage to his beautiful partner Mai from neighbouring East Wall.

Due to extra demand this film will screen until Thursday June 18th! BOOK NOW