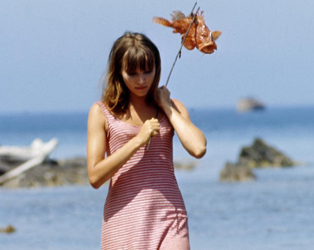 In tribute to Anna Karina (1940-2019), legendary figure of the French New Wave and muse of Jean-Luc Godard, we present Pierrot le Fou, in which she stars as the unforgettable Marianne Renoir.

Godard had already shot five films with Karina including A Woman is a Woman (1961), Band of Outsiders (1964), and Alphaville (1965) before turning to this dazzling masterpiece. Ferdinand/Pierrot (Jean-Paul Belmondo) is an unhappily married man who flees Paris for the south of France with Marianne, his babysitter and ex-girlfriend who is on the run from gangsters.