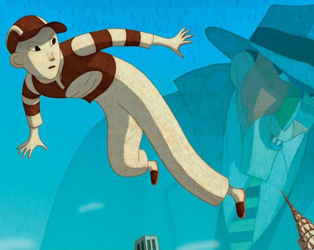 Where they previously brought animated magic to the City of Lights in A Cat in Paris, the directors turn their attention to animating the New York skyline in this affecting superhero film, screening for our Halloween IFI Family slot.

11-year-old Leo is undergoing cancer treatment when he discovers a talent for astral projection, leaving his body to float around New York, though he’ll disappear if he stays invisible too long. With the city under threat from the villainous Man with a Broken Face, Leo teams up with unlucky cop Alex, and their reporter friend Mary, to take on the bad guy.