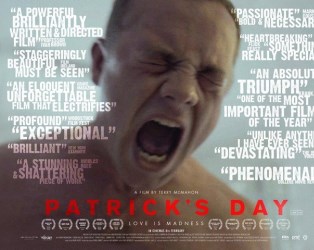 Celebrating the release of Patrick’s Day the new film from director Terry McMahon which opens Friday, February 6th at the IFI, we have a pair of tickets to the opening night screening, followed by a Q&A session and a poster signed by the director and actor Moe Dunford, courtesy of our friends at Wildcard Distribution to give away to one lucky winner!

We are delighted to welcome special guests director Terry McMahon, psychiatrist Prof. Ivor Browne, and the cast from the film to take part in a Q&A session following the opening night screening at 18.30 on February 6th.

Boasting an array of festival accolades (including Audience Awards at the Galway and Cork Film Festivals), Terry McMahon’s second feature bursts confidently onto the screen. Patrick (Moe Dunford) is a warm, open, 26-year-old with schizophrenia. His life is regulated through medication and by his obsessively devoted mother, Maura (Kerry Fox). When he loses his virginity and falls in love with a suicidal air-hostess (Catherine Walker) his life is transformed. But, blind to his need for adult intimacy and convinced that the relationship is wholly destructive, Maura does her best to separate them.

Presenting a bold and unapologetic portrait of mental breakdown and family dysfunction, Patrick’s Day is guaranteed to provoke valuable discussion about the nature of psychiatric illness.

Competition closes at 5pm on Wednesday, February 4th , 2015. The winner will be contacted by email. (See IFI Terms and Conditions  regarding prizes and competitions.)