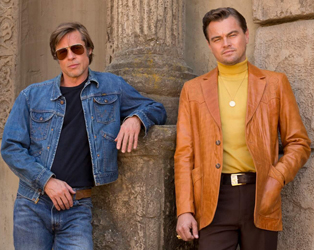 This film was released on Wednesday 14th August 2019 and is no longer screening.

Quentin Tarantino’s ninth film sees him once again take inspiration from historical events, this time riffing on Los Angeles of 1969, when both the golden age of studio films and the hippie dream were about to come crashing to a halt.

The typically sprawling narrative offers Tarantino the chance to assemble another dream cast. At its centre are Leonardo DiCaprio as Rick Dalton, TV cowboy star whose career is beginning to wane, and Brad Pitt as Cliff Booth, Dalton’s stunt double and drinking buddy. Rick’s neighbours include Roman Polanski and Sharon Tate (Margot Robbie, in an affecting, nearly wordless performance), whom he envies as their careers are in the ascendant.

As Cliff encounters members of Manson’s Family, and with our knowledge of actual events, Tarantino’s film is perhaps more poignant and evocative than audiences might expect – until its conclusion.