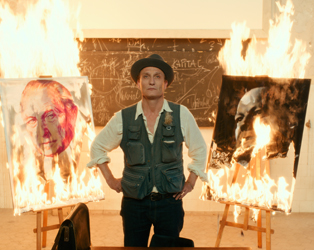 Florian Henckel von Donnersmarck (The Lives of Others, 2006) returns to recent German history for his Oscar-nominated third feature, an intimate epic which explores the intersection of personal experience, politics and art for a young couple in the years following World War II.

Inspired by the life of Gerhard Richter, the film traces the artistic development of Kurt (Tom Schilling), whose passion for contemporary art was ignited by his aunt when she brought him to see the Nazis’ notorious Degenerate Art exhibition of 1937. Years later, in what is now East Germany, Kurt is a sign painter hoping to gain admittance to a local art academy when he meets and falls in love with Ellie (Paula Beer), a student of fashion design, unaware that her father, Carl (Sebastian Koch), a former Nazi-sympathising doctor, was responsible for his aunt’s death.