In a palatial resort hotel, a man (Giorgio Albertazzi) approaches a woman (Delphine Seyrig) and insists they met a year ago – ‘perhaps in Marienbad’ – and fell in love, though she has no recollection of the encounter. An authoritative figure (Sacha Pitoëff) that may be her husband observes their interactions from a distance. Resnais seduces us with the opulence of the setting, and his command of mood and tone, drawing us into an intoxicating psychological labyrinth with no exit. His unnamed characters are victims of self-deception, denial and the slippery nature of memory; they inhabit an indeterminate time frame, unmoored from the bedrock of reality, forever uncertain. 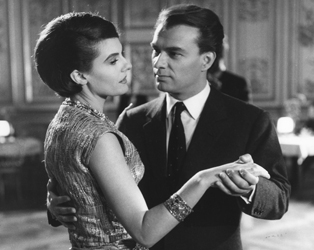