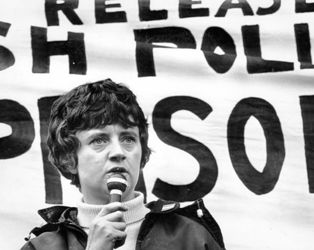 The screening will be followed by a Q&A with director Cathal Black and Máirín de Búrca, hosted by film producer Vanessa Gildea.

This profile of 80-year-old feminist activist Máirín de Búrca takes us from her childhood in Chicago, to her membership of Sinn Féin, to her role as a founder of the Irish Women’s Liberation Movement.

She was an instigator of the Movement’s infamous Contraceptive Train and later a prime mover in a legal case which secured for women the right to sit on juries. In a life of fearless activism, de Búrca was jailed for her anti-Vietnam War activities and fined for attacking Richard Nixon’s car during his 1970 Irish visit, but has never given up.

Interweaving interviews with de Búrca, commentary from colleagues and poetic reimagining of moments in her life, veteran Cathal Black captures the spirit of a woman with an acute sense of social justice and the intelligence and tireless determination to achieve it.