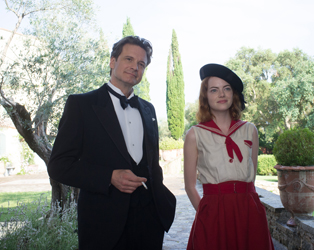 CELEBRATING MAGIC IN THE MOONLIGHT WIN A WOODY ALLEN DVD!

To celebrate the release of Woody Allen’s new comedy, Magic in The Moonlight on September 19th, we’ve teamed up with Warner Bros. Pictures to offer you the chance to win one of 5 DVD copies of Midnight in Paris!

Set in the 1920’s on the opulent Riviera in the south of France, Woody Allen’s Magic in The Moonlight is a romantic comedy about a master magician (Colin Firth) trying to expose a psychic medium (Emma Stone) as a fake.What follows is a series of events that are magical in every sense of the word and send the characters reeling. In the end, the biggest trick Magic in The Moonlight plays is the one that fools us all.

Who directed Magic In The Moonlight?

“Magic in The Moonlight” Cert PG is released in Ireland on September 19th.

Competition closes at midnight on Tuesday, September 23rd, 2014. The winner will be contacted by email. (See IFI Terms and Conditions  regarding prizes and competitions.)