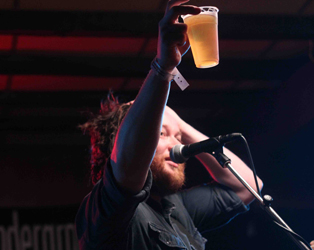 Chemikal Underground has been Scotland’s premier indie label since its establishment in the 1990s, releasing work by a diverse range of fondly-remembered groups such as Bis, Magoo, and Urusei Yatsura, although the label’s greatest successes came from Arab Strap, Mogwai, and label-founders The Delgados. In the early years of the label, a selection of its bands, including Alex Kapranos’s pre-Franz Ferdinand outfit, traveled to perform in Mauron, a small town in Brittany.

In 2015, the musicians retraced their steps,forming the basis of Niall McCann’s documentary, which provides the opportunity to make comparisons between the thriving Scottish DIY music scene of 20 years ago and the difficulties faced by new acts today, given the increasingly mainstream-focused music press and radio. The cast’s reminiscences are engaging and often extremely funny, and as one would imagine, the live footage and soundtrack are exceptional. (Notes by Kevin Coyne.)

The screening will be followed by a live satellite performance by Alex Kapranos, Stuart Braithwaite, R.M. Hubbert, Emma Pollock, and Paul Savage.