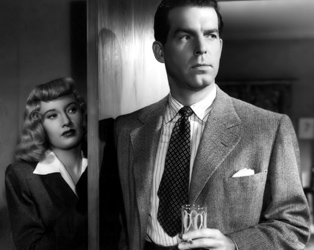 Double Indemnity is considered to have set the template for film noir. Based on a novella by James M. Cain, whose work would also provide the source material for films such as Mildred Pierce (Michael Curtiz, 1945) and The Postman Always Rings Twice (Tay Garnett, 1946), it is the story of insurance salesman Walter Neff (Fred MacMurray), who begins an affair with Phyllis Dietrichson (Barbara Stanwyck), the wife of one of his clients. When her questions lead him to believe that she is considering murdering her husband, he resists at first before becoming a willing collaborator, leading to a maze of complications and double-crosses in this hardboiled classic.