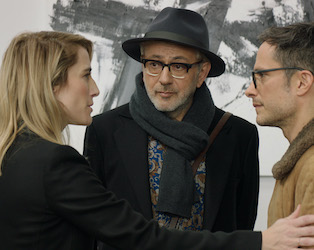 Over the course of his career, the work of Palestinian director Elia Suleiman (Divine Intervention, 2002) has invited frequent comparisons to that of Jacques Tati, Buster Keaton, and Roy Andersson as a result of both Suleiman’s deadpan acting style and his reliance on visual storytelling over expository dialogue. In his latest, typically droll film, Suleiman’s conceit of playing a filmmaker looking for international funding is played out in a series of vignettes that function not only as a meditation on the continuing plight of his people and their desire for a safe place to call home, but also draw sharp parallels between the evolution of the surveillance state in the Occupied Palestinian Territories and some of the west’s major cities.